The Pittsfield CityJazz Festival, Oct. 6-15, 2017, is a celebration of America’s classical music, our cultural gift to the world. Spanning two weekends, our 13th annual festival kicks-off with the popular “jazz crawl,” on Columbus Day weekend, Oct. 6-8. Local musicians perform in restaurants and lounges in Pittsfield’s Upstreet Cultural District. (click here for schedule)  It’s no secret that the Berkshires are home for some amazing talent, and it’s a pleasure to present so many of them in a concentrated timeframe and format. Capping off both weekends, there will be jazz brunches on Oct. 8 and 15.

One of the most important aspects of the festival is our Jazz Prodigy series, featuring young performers whom we expect to become significant figures in jazz. As has happened for the past three festivals, this year’s artist, pianist Caelan Cardello, comes to us from Jazz House Kids, the renowned educational and performance program in Newark. A high school student in Teaneck, New Jersey, Caelan and his trio appear at the Berkshire Athenaeum on Wednesday, Oct. 11, at 7pm. Thanks to the support of the Friends of the Athenaeum, there is not charge for tickets to this event.

Our two marquee events show remarkable range and diversity…from the New Orleans mainstay Samirah Evans –with special guest Charles Neville– to a celebration of Dizzy Gillespie’s 100th birthday. Tickets are now on sale for both events.

One of the most popular jazz and blues vocalists in pre-Katrina New Orleans, Samirah Evans dedicates time to perpetuating indigenous American music. With a mix of swampy, sultry, and soulful takes on jazz standards and originals, she first performed at the New Orleans Jazz and Heritage Festival in 1990, and became a regular fixture for fourteen consecutive years. 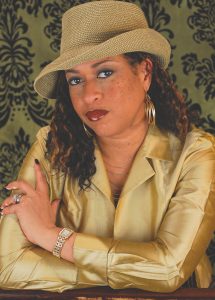 Hurricane Katrina caused Samirah and her husband to seek out new living arrangements outside of New Orleans, so they moved to his native town of Brattleboro, Vermont in the fall of 2006. Her debut performance was at the Vermont Jazz Center with the VJC Big Band. She soon found herself sharing the spotlight with the legendary Shelia Jordan as a principal in a musical theater performance, Beatnik Café’, depicting the beatnik generation.

She has toured Europe, Asia, and both North and South America as a headliner, and shared stages with a multitude of legendary artists from B.B. King and James Brown, to New Orleans own Queen of Soul, Irma Thomas.

Her live performance repertoire runs the gamut from raunchy blues to jazz smooth as silk. She has often been compared to Billie Holiday, Ella Fitzgerald, Nancy Wilson, and Etta James She made countless new friends in the Berkshires in an appearance at Zucchini’s in 2016, and we are delighted to bring her back for the Pittsfield CityJAZZ Festival.

Guest soloist Charles Neville provides a special treat. The second oldest brother of the famed New Orleans musical family, Charles has the most diverse background. His experience on saxophone has included rhythm & blues, funk, jazz, be-bop, popular and even American Indian music. He cites as influences Louis Jordan, Charlie Parker, John Coltrane, Sonny Rollins and Professor Longhair. He’s a popular Berkshires artist, and we’re delighted to have him on the Pittsfield CityJAZZ Festival program for the first time

Flavours of Malaysia is the setting for many a rising jazz artist, as well as those whose star has already ascended. Acoustically and visually, it’s a “happening” scene. For our jazz festival audience, Flavours is offering special dinner pricing of $15, for your choice among three of their most popular entrees, with stir-fry, curry, and vegetarian options. For the show only, tickets are $25 in advance, $30 on the day of the show. The doors open at 7:45pm, when the special dinner pricing goes into effect.

This event is now sold-out. If you were lucky enough to get tickets, we look forward to seeing you there.

History has produced its share of great artists and great people, and John Birks “Dizzy” Gillespie was both.  As a performer, he left behind an incredible record of innovation and inspiration; as a composer, a broad repository of musical masterpieces; and as a man, a legion of friends, colleagues and compatriots who remember him with the same degree of love and esteem they reserve for his work. Those “Dizzy for President” 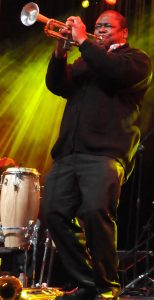 Berkshires Jazz celebrates Gillespie’s 100th birthday with a performance by the Dizzy Gillespie Afro-Cuban Experience, a 6-piece ensemble led by his long-term bassist John Lee. The group showcases the unique rhythms and well-loved melodies (such as “Manteca” and “Tin Tin Deo”) of Gillespie’s oeuvre of Cu-Bop, which he developed in the 40s and 50s with Chano Pozo. That music rings every bit as fresh today, which is why

jazz ensembles around the world are still performing it.

And, the expanded repertoire of the Dizzy Gillespie Afro-Cuban Experience also explores the broader world of Latin-American music–the tunes that Dizzy likely would be playing today.

Our all-star youth ensemble opens the musical proceedings at 7:30pm. Tickets are $23-38, and are available here.

“Back in the day,” Berkshire radio personality Dave Kidd, father of Berkshires Jazz treasurer Barbara Seddon, conducted this interview with Dizzy Gillespie; it is now on file at the International Jazz History Database.