[The legendary Berkshires radioman David Kidd interviewed countless jazz figures who performed here during the 1950s. In this blog post, his daughter Barbara reflects on those days. Barbara is Treasurer and a founding Board member of Berkshires Jazz, Inc. We encourage others to contribute their anecdotes about jazz in the Berkshires. Ed.]

As far as back as I can remember, my life at home was surrounded by music, whether it was jazz, folk or classical. Jazz musicians such as Rex Stewart, Randy Weston and Odetta were frequent guests. I grew up with Rex Stewart’s kids.  As a result, our home was always desegregated, which made for a totally non-discriminatory upbringing. I went to Tanglewood for the classical music (my dad was an usher for several years) and to Music Barn to see such greats as Duke Ellington, Dave Brubeck and many more (and where I ushered) … (my personal favorite was Josh White.) 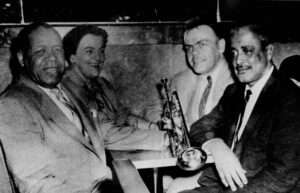 In the fifties my father –David Kidd– was asked to do a talk show, which he called the Story of Jazz, on WBRK, the local radio station, and it was recorded in our living room. This meant no talking or other distractions while my father was talking. It was a labor of love on his part, as he received no remuneration for it. However, as a result, he has left a legacy the likes of which few people have left. That legacy consists of about 60 hours of interviews with people like Duke Ellington, Dizzy Gillespie, Thelonious Monk and many more. Eventually WGY in Schenectady offered him a slot on Monday nights which he did from the late fifties until he passed in 1966 at the age of 49. [Dave is pictured here, right rear, with his wife Barbara (the author’s mother), Henry “Red” Allen (l) and Buster Bailey.]

With the help of Ed Bride, President of Berkshires Jazz, I was able to find a permanent home for these interviews at the International Jazz History Database, which is housed at Worcester Polytechnic Institute in Massachusetts. You can enjoy them any time, at https://www.jazzhistorydatabase.com/archives/david-kidd/index.php.