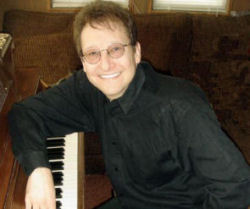 The Roy Gerson Trio will play a concert during the 2014 10×10 Upstreet Arts Festival in Baba Louie’s Backroom, 34 Depot St., Pittsfield, MA, Saturday, Feb. 15, 2014 8PM. Piano standout Roy Gerson puts his unique spin on jazz compositions that were popularized by 10 jazz pianists over the decades, from historic to current.

With a style that has been described as ranging from Little Richard to Ray Charles to Erroll Garner, pianist Roy Gerson has captivated North American music fans with his unique treatment of jazz standards and rarities. Attending the Manhattan School of Music as a classical piano major, he soon fell under the sway of the sounds of Lester Young, Buddy Rich, the “Jazz at the Philharmonic” recordings and, above all, the pure entertainment potency of Louis Armstrong. He moved quickly and easily into the professional arena, gigging with traditional jazz bands and becoming the regular pianist with the Widespread Depression Orchestra, playing all over the country in the early 1980s.

Roy Gerson – If I Had You

Becoming one of the most in-demand performers, he headlined the top jazz clubs in New York, such as the Village Gate, Blue Note, Tavern on the Green, and a two-year stint at the club Zanzibar. He appeared as part of a 1920s jazz orchestra in Francis Ford Coppola’s film “The Cotton Club,” swinging some of the classics of the Harlem Renaissance. Soon after, he was hired by Woody Allen for a cameo in Crimes and Misdemeanors and his more than a dozen subsequent films have included The Mirror Has Two Faces, directed by and starring Barbra Streisand.

“Supremely talented. Gerson knows how to royally entertain…energetic renditions of timeless classics…melody, passion, and improvisation all come together in one glorious package.” – Chicago Tribune
“Run, don’t walk to hear Roy Gerson! He’s a breath of fresh air…plays with wit and imagination…in the tradition of Erroll Garner and Oscar Peterson.” – WNEW Radio