[And what a great concert it was. Watch this space for news of Grace Kelly’s Oct. 9 performance with the University of Connecticut Jazz Ensemble. Our first event at The Stationery Factory in Dalton, Mass.]

Alto saxophonist Grace Kelly was a child prodigy, appearing with Phil Woods at the Pittsfield CityJazz Festival…at the age of 14… and made jazz history. She celebrated the event five years later with a CD called “man with the hat,” on which Phil was her guest. Five years from child wonder to headliner.

Acclaimed the world over, Grace has appeared at all the major jazz festivals and has been featured on CNN, NPR, and magazines as far-ranging as DownBeat and Vanity Fair, which declared her “a significant millennial in the jazz world”. 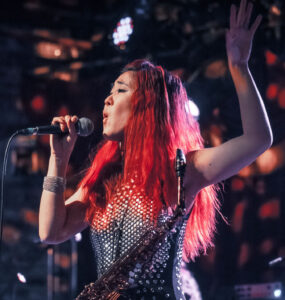 The prodigious performer, singer, composer, and dancer will be returning to the Berkshires for a CD Release concert on August 28. Her national tour starts in central Massachusetts, heads for the east coast, and the first leg concludes at the Lee Congregational Church in downtown Lee, “the Gateway to the Berkshires,” on August 28 at 7pm.

Don’t miss out, this will be one of the hottest tickets of the summer cultural season in the Berkshires. Click here for our online box office or past the following URL into your browser.
https://berkshires-jazz.ticketleap.com/grace-kelly-quartet-in-the-berkshires/details

And mark your calendar for Oct. 9, when Grace returns as a guest artist with the University of Connecticut Jazz Ensemble. The setting will be The Stationery Factory, in Dalton, Mass., whose acoustics are unparalleled. Sunday of Columbus Day weekend, when fall foliage is at its peak.